A note on BNF Parser to verify valid number: a problem from leetcode

BNF Parser is one of the step in the compiler theory to analyze the syntax validity of number, program sentence, variable, etc. It is also a perfect recursive algorithm sample when you plan to study and implement this algorithm.

I got the question from leetcode.com. It is the hardest question listed in the problem list. That attracts me to study the parser implementation for the problem. I read a compiler theory textbook also two decades ago. I have to go over the first half of a compiler theory book and a note before I start to implement the algorithm. 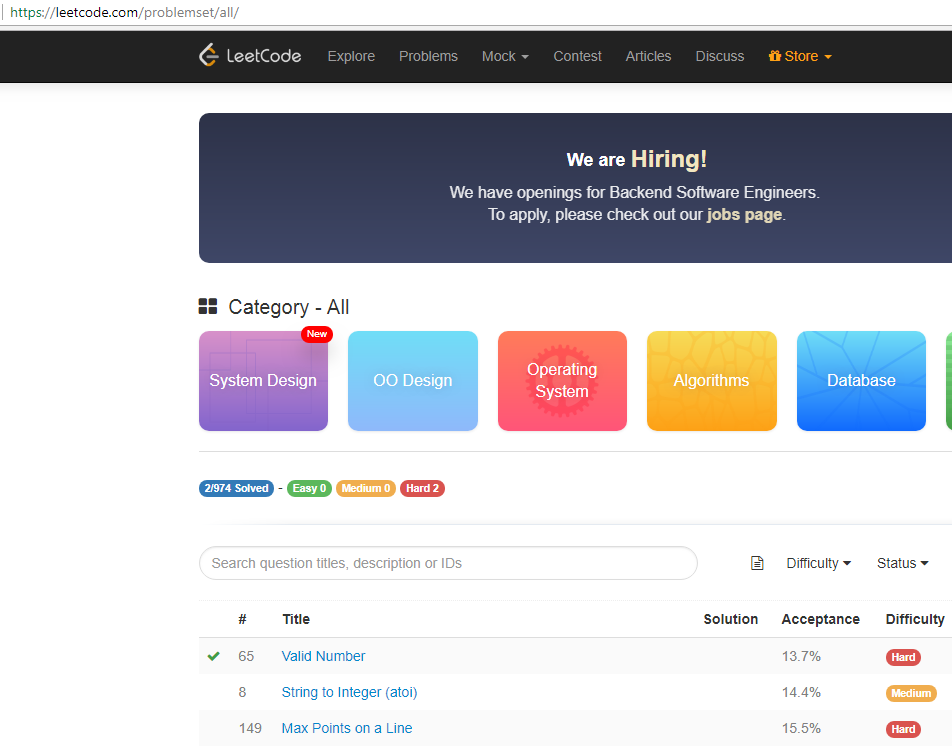 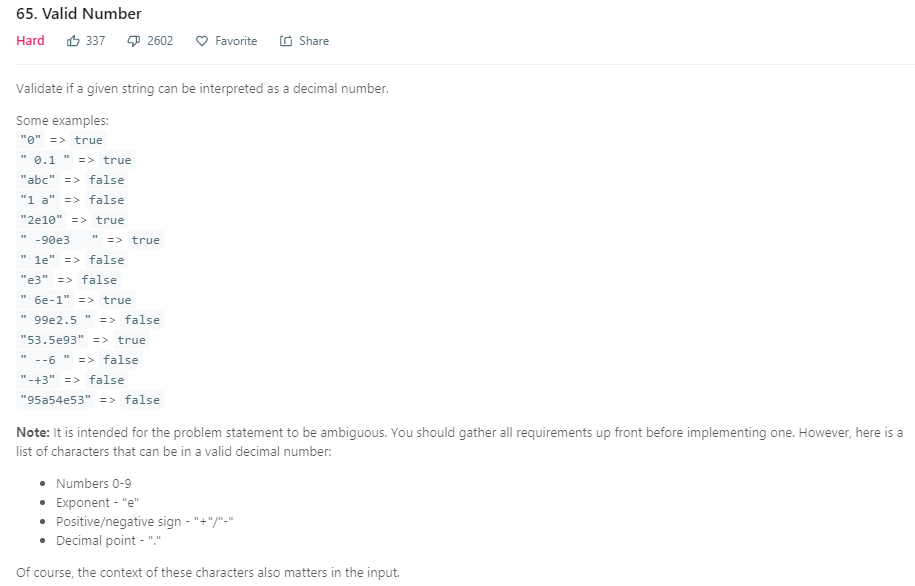 Also, it provides a template for you to write your code. Of course, the template is as simple as below.  You need to write the isNumber method to return true or false for the input parameter string.

So, when I encounter the problem, I immediately figure out I needs to use the parser process in the compiler theory.  Of course, you do not need to read the whole book to implement the parser.  Also, the backend logic behind the parser is the BNF (Backus–Naur form). You need to write the correct BNF to represent number.

That is the brainstorm. You need to understand BNF, the parser implementation and how to form a BNF for a number.

The note, https://www.itu.dk/~sestoft/programmering/parsernotes.pdf, is good for me to go over the parser theory. Also, I refer the textbook, Compiler-Construction-Using-Java-JavaCC-and-Yacc, when I want to get more detail from the note.

Also, I get the BNF formula of Scientific Notation for a number.  http://courses.washington.edu/css343/zander/NotesProbs/grammarans

BNF is a syntax language to accurately describe a thing. What is a number? Wow, you may say “number is a number, for example, 123, 123.45, or 12.3E-05”. But that is for descriptive and nothing helps for the exact definition. That is why we need to have BNF. Below is the BNF of number description: (EPSILON means nothing)

The BNF provides 7 rules on how to construct a number via Divide and Conquer approach. Here is the explanation for the 6 rules:

To be continue, you may wonder for below two questions:

Now, our pointer points to the 2nd char “1”. Ok, we need to use the SubNumber to derive it. Although SubNumber has two rules, it is easy to know that the 2nd rule starts with “.”, which not meet with the char “1”. So, we expand the tree as below (left Diagram). Now in the left Tree, DigitList has two rules also, one Digit or More Digits. According to the 3rd char “2”, we knew that the DigitList should using More Digites rule, that is Digit + DigitList (the Right diagram)

Ok, next char is “2”, we need to use the DigitList nonterminal in the above right diagram to derive a “2”. As mentioned above, DigitList has two rules also, one Digit or More Digits. As there is no more digit after “2”, we should use the one digit rule (the left diagram below). Now, the Digit nonterminal can easily derive to 2. 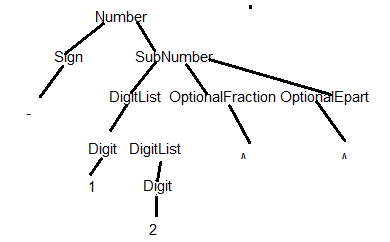 It seems not hard to prove. Let’s leave here and not discuss the math proof.

We trust it is correct.

Parse is defined as the reconstruction of a deviation tree. So, if you understand the above sample deviation procedure, it is not hard to implement the algorithm to verify a number.

Below is the java implementation framework for the BNF. 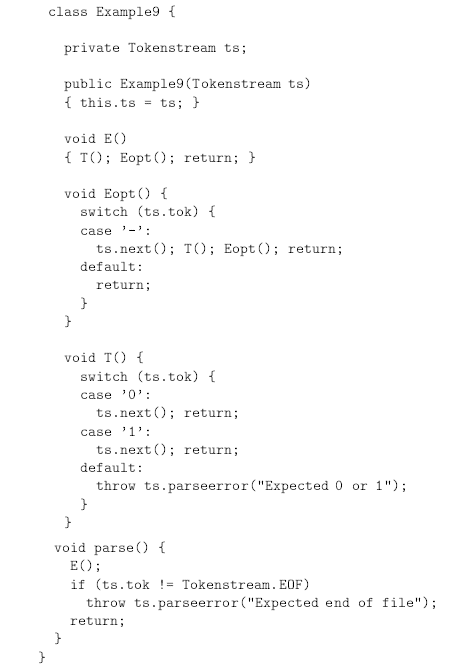 The framework is very simple. The parse method starts with the method name of a root element of a derivation tree.  The root method will be composed by the derivation rule which formed by non-terminals with sequence specified in the root derivation rule, such as T(), Eopt(). Each non-terminal will have its method which is also similar as its derivation rule.

For each non-terminals method (include all non-leaf nodes in the tree), the implementation non-terminal template as below: 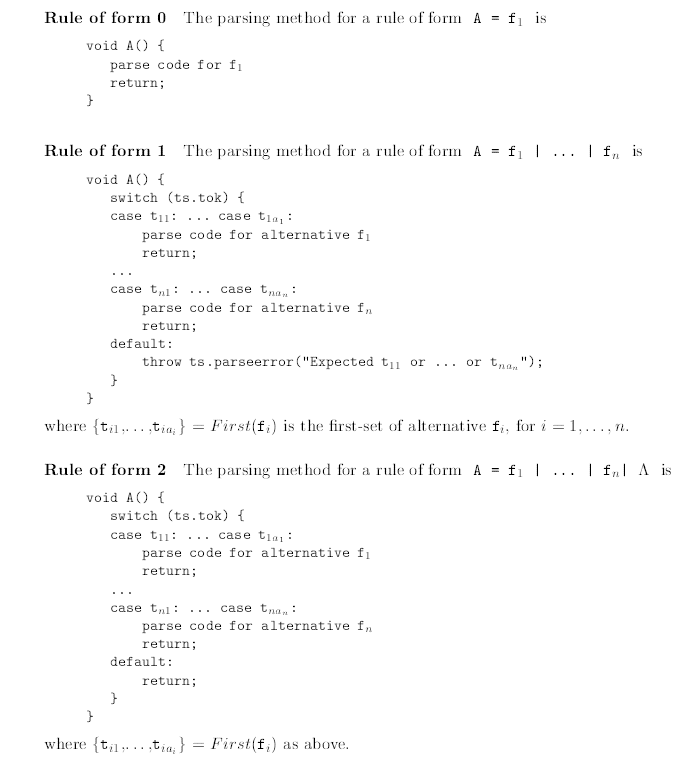 It is easy to understand. If we only one derivation rule for the non-terminal, we should just handle the rule with sequence specified in the rule.

It is similar as form 1. However, it does not throw exception as the form 2 allows Nothing (^) as derivation result. So, it directly returns if can’t find the match of the current char. The current char will handle by the following non-terminal (called as Follower(Eopt)). For example, current char is “1”, and the current underived non-terminal is “B” and “C”. So, we will check whether “B” can derive “1”. If it can’t derive but “B” can derivate to Nothing(^), we should give chance to “C” to handle “1”, instead of throw false exception to parser that it is wrong expression for the BNF.

The BNF related to the java implementation  is as below

if(valueType==ts.EOF) return; //no more char, we should let it go

//check whether the first part is number

checkThrowExeption(); //at least one digit after e 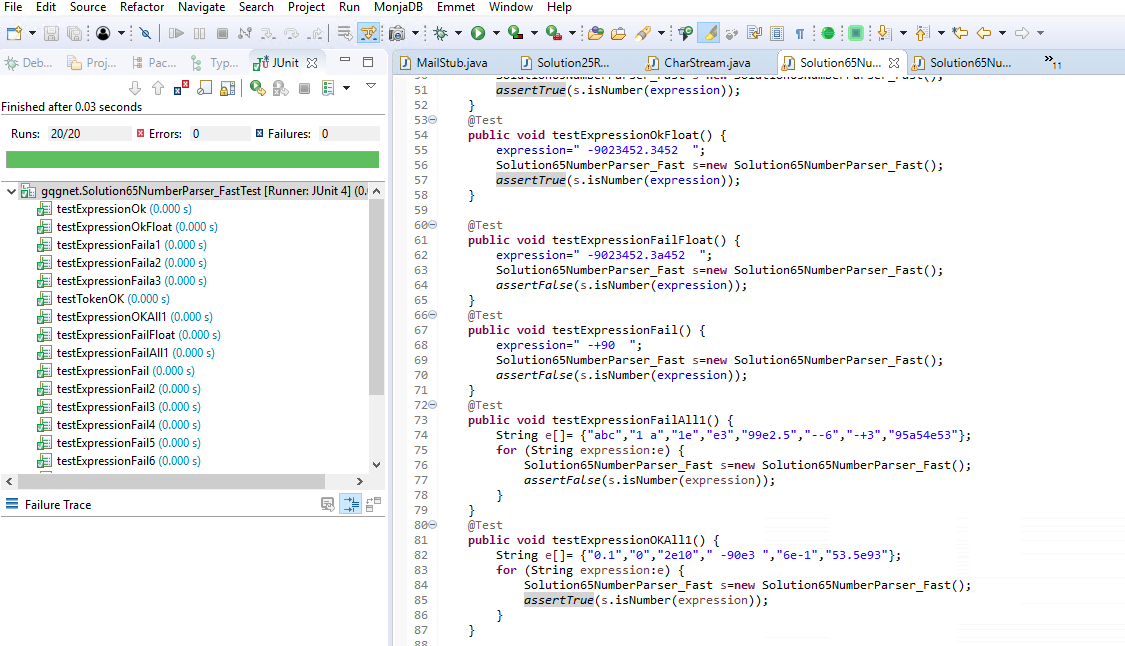